The Sea Organ is situated near the new cruiser port, as a part of Zadar's Riva, and can be observed as a differently shaped part of the coast which consists of several stairs that descend into the sea.

The stairs extend for about 70 meters along the coast, under them, at the lowest sea-tide level, 35 pipes of different lenght, diameter and tilts were built in vertically to the coast and they raise aslant until the paved part of the shore and end in a canal (a service corridor). On the pipes there are LABIUMS (whistles), which play 7 chords of 5 tones. Above the canal there are perforated stone stairs through which the sound comes out, the air pushed by the sea.

This site is a blend of human ideas and skills and the energy of the sea, waves, tide and flood, a place for relaxation, contemplation and conversation while listening to an endless concert of mystic harmonies of the "Orchestra of Nature".

Sea Organ is constructed according to the project made by architect Nikola Bašić with the help of several experts: Professor Vladimir Andročec was the sea hydraulics consultant from the Zagreb Civil Engineering University, the pipes were made by Goran Ježina from Murter, a well-known organ art workshop - Heferer from Zagreb made 35 labiums for every pipe, and it was tuned by professor Ivica Stamać from Zagreb. 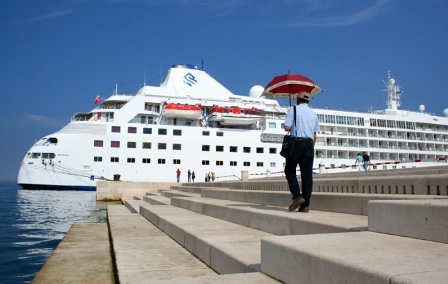 In 2006 Croatian architect Nikola Bašić received the European Prize for Urban Public Space in Barcelona for his Zadar Sea Organ project, as the best among 207 candidate projects from across Europe.