Novgrad is a village and port on the southern coast of the Novigrad Sea, in County of Zadar.

Novigrad is a village and port on the southern coast of the Novigrad Sea, next to the submerged mouth of the Draga brook. Chief occupations are farming, viticulture, fishing and tourism. Novigrad is located on a local road, branching off from road of the main (M2, E65).

Novigrad - Beaches:
There is a public pebble beach with trees which provide shade.

Novigrad (Zadar) - History and Cultural Heritage:
Novigrad was first mentioned as a castrum at the beginning of the 13th century. The fortification system has been partly preserved. Fragments of stone tablets with "pleter" (interlacery ornaments) have been preserved in the pre-Romanesque graveyard church.

- The most important monuments worth seeing are: the church of St . Catherine from the 14 th cent.

The prince from Krbava, Butko Kurjaković, had the church built. There was a monastery within the church structure. The church and monastery were demolished during the Cyprus War (1570-1573). On the site of today's church there was the church of St. Paul with the Benedictine convent demolished in 976.

The fort and fortifications, and the remains of the church of St. Barbara, St. Nicholas from 1800, the church of Childbirth of the Immaculate Conception from the 19 th cent, the votive statue of Our Virgin, Planita – chasuble which, according to tradition, was embroidered by the Croato-Hungarian Queen Elisabeth, wife of Louis of Anjou 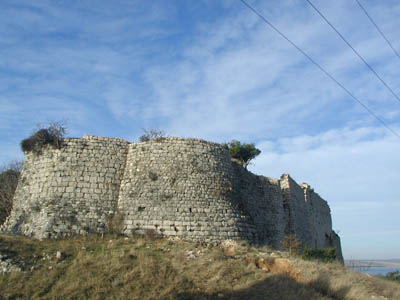 The Novigrad men are excellent fishermen and the women excellent housewives. They prepare very tasty food made of fish or venison in the old traditional Novigrad way.
The Novigrad women are good also at preparing traditional Novigrad cakes.
Once the inhabitants of Novigrad were known as excellent winegrowers and winemakers. Today there are few vineyards and little wine, but good homemade red and white wine as well as desert wine can still be found.
Novigrad (Zadar) - Excursions:
- fullday baoat excursions to Kornati Islands (departure from Zadar)
- fullday bus excursions to National Parks Plitvice or Krka
- rafting and cayacing on the river of Zrmanja
- individual visting of : natrual partk the Mountain of Velebit, National Park Paklenica,Tulove grede, Velebit Channel, river of Zrmanja, river of Krupa, Cerovac caves, Vrana Lake.